Little House on the Prairie Wiki
Register
Don't have an account?
Sign In
Advertisement
in: Characters, Female characters, Oleson Family,
and 6 more

The Return of Nellie

Nellie Oleson Dalton was the oldest child of Harriet and Nels Oleson. Nellie has two siblings, Willie and adopted sister Nancy. She married Percival Dalton and had two children with him.

Nellie was a spoiled girl, the daughter of a wealthy general store owner and his wife who got everything she wanted from her mother when she was little. As a result, she became rather bratty, and all the other kids hated her for it.

Nellie was the first real antagonist on the show. She served as a rival and nemesis to show’s protagonist, Laura Ingalls. She would always try to sabotage Laura but usually failed in her efforts. At the end of most episodes, Laura would successfully exact her revenge on Nellie. Nellie had much misfortune in her quarrels with Laura. Throughout the series, she has had horse manure thrown on her, was pushed down a hill in a wheelchair, was pushed into the mud, and was even punched in the face by Laura at least twice! After some years, Laura and Nellie stopped hating each other and then they became close friends. As a gift for finishing school, Harriet and Nels gave Nellie a restaurant. Caroline Ingalls was soon hired as a cook and waitress; Percival Dalton was hired to teach Nellie how to cook and manage a successful restaurant. Initially, Nellie was her typical mean-spirited, snarky self, but Percival eventually got her to change her ways and she matured into a kinder, warmer and more pleasant person.

Eventually, Percival fell in love with Nellie. After declaring their love for each other, they decided to be married outside due to Percival being Jewish — and much to Harriet’s dismay. Percival and Nellie later married and had two children, Jennifer and Benjamin Dalton. Percival’s father passed away soon after, and the family then moved to New York so Percival could take over his father’s store. Eventually, Nellie returned to Walnut Grove to visit her family. However, her adopted sister Nancy became jealous of the attention Nellie was getting and ran away from home.

Nellie was portrayed by Alison Arngrim throughout the series.

In an interview, Melissa Sue Anderson was asked about Arngrim: “It was interesting working with Alison because she was so shy... she couldn’t look at you and deliver her lines. The director, Bill Claxton [ Episode 103: Country Girls ], had a terrible time getting her to actually look at you and say her lines. And she grew... she got it eventually but she was just so shy and so scared... maybe it wasn’t because so was so shy, but she was so scared. She was petrified I think, and you know, she became the little kid you loved to hate and she did a great job with it.”[1] 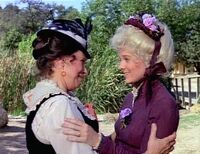