Mary Amelia Ingalls Kendall was the first daughter of Caroline and Charles Ingalls. She had seven siblings altogether. Laura, Carrie, Charles, Jr. (who died shortly after birth), and Grace. Albert, and later, James and Cassandra, were adopted after Mary left home. The family met Albert, a runaway who had been a ward of the state (Albert never really existed, he was created in the TV version), after they moved temporarily to Winoka to be close to Mary. Siblings James and Cassandra were adopted later, back in Walnut Grove, after their parents died in a tragic wagon crash. Mary was an adult at the time. The real Mary Ingalls never married, although she did in the TV series. Growing up in Walnut Grove, Mary was an excellent student and spent most of her free time studying.

When she was 15, Mary went blind. Her failing eyesight was first noticed during a yearly checkup at the eye doctor in Mankato. After returning with new lenses in her glasses, she found her vision was still not improved. When Charles took Mary back to the doctor to find out what the problem was, the news was not good; the doctor told Charles that scarlet fever had weakened the nerves in Mary's eyes and there was little time left before she would go blind.

Charles hesitated to tell her this, though he finally did, and a few days later her sight was gone. Doctor Baker suggested that they send Mary to a blind school so she could have some kind of life; Charles and Caroline agreed and made plans for her to be taught at a blind school in Iowa.

On arriving at the school, Mary met her teacher, Adam Kendall. Originally she resented Adam, but this changed shortly thereafter. Later, Adam and Mary fell in love and got married a year later when Mary was 16 and Adam was around 20. (Mary never really married, or had children; this story was created for the TV series). After Adam asked Mary to marry him and Mary accepted, Mary began to have second thoughts. When Charles and Caroline [Mary’s parents] came to Winoka for the wedding and told Mary and Adam stories of Mary’s childhood and how she used to “wander off” alot [meaning she used to dash out of the house whenever her parents’ backs were turned]. After hearing this, Mary became anxious, realizing that she and Adam were both blind and that if their child were to wander away, she and Adam would not be able to find them. This worried Mary excessively to the point that she told Adam that she didn’t want to marry him, even though she was still very much in love with him. Adam was heartbroken by this, and begged Mary to change her mind. Soon after, while Mary and Adam went on a picnic with Charles and Caroline and the children from the blind school, a massive dust storm suddenly came up. During the storm, one of the blind girls gets lost, and Adam and Mary begin to search for her. When they find her, Mary realizes that she is capable of doing big things even though she is blind, and so asks Adam if she could still marry him — he says yes. Mary then asks Adam and the blind girl if the girl could be the flower girl at her and Adam’s wedding. Suddenly they hear Charles call their names through the storm, while Mary and Adam kiss. The next day, Mary and Adam get married and begin their new life together.

Three months into their marriage, Mary and Adam move to Walnut Grove to open a new blind school with another blind school, and to be closer to Mary’s family. In the episode, “The Sound of Children,” Mary finds out that she is four months’ pregnant with her and Adam’s first child. A month later, Mary miscarries the baby, who was said to have been a boy by Doctor Baker. Upon hearing this, Mary is devastated and falls into a depression, but eventually, with the help and support of her family and friends, pulls herself out of it. Mary and Adam accept the fact that they lost their son and use the tragic circumstances to help make them stronger. They are also willing to try again for another child. Four months later, a year into their marriage, Mary became pregnant with her and Adam’s second child. Nine months later, nearly two years into their marriage, Mary gives birth to a perfectly healthy baby boy, whom she and Adam name Adam Charles Holbrook Kendall [“Adam” after Mary’s husband, “Charles” after Mary’s father, and “Holbrook” after Mary’s grandfather on her mother’s side]. Sadly, a month later, while Adam Kendall, Jr. was still a baby, he died, along with Alice Garvey (both ficticious characters), in a fire at the blind school because Alice told Mary she would get the baby but ended up saving another student first, causing a delay in getting the baby and herself safely out. The fire was unintentionally started by Mary’s adopted brother, Albert, and a friend, who were smoking in the basement of the building during a party. Mary went into a state of shock after this, and eventually came out of it.

One and-a-half years later, her husband and teacher, Adam, regained his sight, and they moved to New York, where Adam was a lawyer. Mary and Adam’s final appearance on the show was in a Christmas episode, where they traveled into Walnut Grove just prior to a blizzard, and spent Christmas at Charles and Caroline’s house.

Shortly after this, Charles, Caroline, Albert, Carrie, and their other children moved out of Walnut Grove. Laura, Almanzo, and their baby, Rose, were the only family members to remain in the town. Although Charles and Albert visited several times, Adam and Mary remained in New York after that.

Mary Ingalls went blind when she was 15 years old. This event was covered in the two-part episode, “I’ll Be Waving as You Drive Away.” The title for the episode comes from a line spoken by Adam Kendall when Mary was leaving to go back home to Walnut Grove. This event started when the Ingalls were having dinner, and Mary remarked that her eyes were tired, probably from studying so much. Charles suggested that they visit the eye doctor, since it was time for her annual check-up anyway.

At this visit, the doctor told Charles that Mary needed a stronger prescription and that her eyes looked fine. Once back in Walnut Grove, Mary found that this prescription did not help her see any better than the previous one. They re-visited the doctor, and the news was not what they expected. The doctor told Charles that a previous case of scarlet fever had weakened the nerves in Mary’s eyes and she would soon become completely and permanently blind.

When Charles told Mary this, she was very sad, and became bitter for a short time because she felt she was a burden to her parents. Later, they decided to send Mary to a blind school in Iowa. Mary eventually became a teacher, just as she and her parents had always dreamed.

As a child, Mary was usually the gentle one of the family, and was especially close to her Ma. However, as the eldest, she was also very dependable. She was willing to fight to stand up for her family if need be. An example of this is in the episode “The Bully Boys,” where Mary stands up to schoolyard bully Bubba Galender when he harasses the children.

Mary was very pretty growing up, with her blue eyes and golden hair, and boys always seemed to be smitten with her, much to Laura’s dismay. She rarely reciprocated their affections, as was in the case of Johnny Johnson. In a letter to his parents, Charles once wrote that “boys are already flocking around (Mary) like bees to honey.” She was also quite intelligent, and Laura once stated that Mary could “write as good as Miss Beadle.”

Mary was very protective of her younger sisters, often seen taking care of baby Carrie. She was also close to Laura, worrying about her when Nellie Oleson faked friendship with Laura in the episode entitled “Talking Machine.” If Laura had taken heed of Mary’s warning, she wouldn’t have been hurt by Nellie’s backstabbing.

Mary’s book character was similar to the television show character in several ways. Just as in the show, Mary went blind from scarlet fever. However, she did not have to have glasses in the books. In the book, Laura took a larger role in helping her sister get the money raised so that Mary could go to the blind school than in the television show (the Ingalls family did not live in Walnut Grove at this time). Laura was “Mary’s eyes” whenever they went somewhere new.

In the television show, before she met Adam Kendall, Mary was engaged to John Jr. who, when he went to college on a scholarship, met someone else, and left her. She lost her sight shortly after that and went to the Blind School in Iowa where she met Adam.

Mary Ingalls was played by Melissa Sue Anderson throughout the series. When casting, there were about 100-200 girls who auditioned for the role.[1] Melissa Sue Anderson remarked that one day she read a script for Michael Landon, and after pairing her with Melissa Gilbert, saw that the two worked well together, like the sisters that they would soon be playing on TV. When Anderson first saw the ad, it read that they were looking for parts in a western television show. She had no idea what character she was going to play at this time.

In an interview where Melissa Sue Anderson was asked to describe Mary’s character, she said, “I think Mary was really ultimately her mother’s daughter, you know, she took after her mother and she wanted to be just like her...Her mother, at some point, I believe, had been a schoolteacher in her early years. And she was so much more like her; she wasn’t the tom-boy that Melissa Gilbert [Laura] was, taking after Michael’s [Charles] side basically... as was shown in the episode where Melissa Gilbert [Laura] had convinced Michael Landon [Charles] to take her along with him on a hunting trip, and she [Mary] emulated her mother... she wanted to do well and be like her mother.”[1] Melissa Gilbert also remarked that Mary was the one everyone wanted to marry and Laura was the one everybody wanted to go fishing with, like Patrick Labyorteaux [Andrew Garvey, whose mother Alice Garvey perished in a fire along with Mary’s baby].[2]

Melissa Sue Anderson was also the only actor in the Little House series that received an Emmy nomination for her role.[1][3] 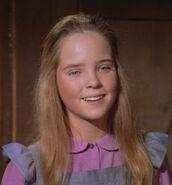 Mary Ingalls as a child

Mary Ingalls and a horse 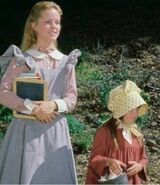 Retrieved from "https://littlehouse.fandom.com/wiki/Mary_Ingalls_Kendall?oldid=22019"
Community content is available under CC-BY-SA unless otherwise noted.