I´ll be Waving as you Drive Away Part(2)

Eva Beadle-Simms, simply known as Miss Beadle, was a school teacher at the Walnut Grove school, and the first teacher that Mary and Laura Ingalls had other than Caroline.

Eva's past is not known but her father was an officer in the Union army during the Civil War and was decorated for valor by General Grant. (Episode 408: The Aftermath) Eva was the primary teacher at the school with a few exceptions, such as when she was injured while on her buckboard after her horse got spooked (Caroline who was a former teacher substituted for her during this time). (Episode 110: School Mom) She was a good teacher and a fine upstanding always concerned with her students education and well-being as with when she bought Laura a notepad when she could not afford one. (Episode 201: The Richest Man in Walnut Grove) She was meritorious and held no prejudices toward any one regardless of race, creed, or ethnic background such as when Solomon and Joseph Stokes (Spotted Eagle) came to her school. (Episode 318: The Wisdom of Solomon), (Episode 315: Injun Kid) She once courted a man named John Stacey but nothing ever came of it. (Episode 202: Four Eyes) Despite her reputation, the question of her ability to discipline the older problem children came up in the mid-1870s and she was temporary relived of her duties. However, the new teacher turned out to be a disappointment and she soon returned at the rejoice of everyone and the students causing the problem, respected her more. (Episode 217: Troublemaker)

Miss Beadle rarely raised tensions in the community but there were some times that she was caught in some problems. She once made a mistake dismissing her students early on Christmas eve believing it to a good decision in lieu of a blizzard that stranded some of then out in the cold. (Episode 311: Blizzard) Although one Caroline's best friends, she had a moment of anger towards her when Carrie fell down a hole on a school assignment believing for a moment that she was responsible as she sent them out, but she apologized for it recognizing that she got angry and made up. (Episode 312: Little Girl Lost) She also raised tension in the school and the community when she held a discussion on the Civil War as part of her history lesson. This angered some especially Lewis Ford and his son Bob Ford and threats were made. (Episode 408: The Aftermath) All these situations were resolved peacefully resulting in no lose of respect or love.

Eventually, she got married to Adam Simms and was the stepmother to his son Luke. During this time Nellie Oleson and Luke left Walnut Grove in the night and got married, the marriage was cut incredibly short when Harriet and Nels, Harriet brought a rifle and it went off, shooting the ceiling. After this, Nellie and Luke got a divorce and while the divorce was taking place Adam and Eva decided to get married, and Nellie was the maid of honor. (Episode 412: Here Comes the Brides)

Eva gave birth to her and Adam's first child in, "A Most Precious Gift", she had a boy named Matthew. This caused Caroline to get mad because she wanted a boy.

Miss Beadle was portrayed by Charlotte Stewart throughout the series. In 2006, Charlotte Stewart was nominated for a "Teacher of the Year" award presented by the TV Land awards. During in interview conducted by Little House fansite Prairie Fans, Stewart was asked about what it was like to be on Little House: "I absolutely loved being on the Walnut Grove set when we were shooting in Simi Valley. It really was like stepping into the old west. I felt so comfortable in the clothes and playing the part of a teacher to the children. My godmother Pauline Wilkie was actually a teacher in a one room schoolhouse in Mendocino California."[1] In total, Miss Beadle appeared in 45 episodes. 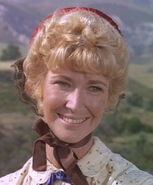 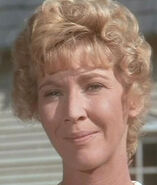 Retrieved from "https://littlehouse.fandom.com/wiki/Eva_Beadle-Simms?oldid=20642"
Community content is available under CC-BY-SA unless otherwise noted.