Adam and Mary return to Walnut Grove for Christmas, and arrive at the Ingalls' just ahead of a fierce blizzard. The Ingalls, along with their friend, Hester Sue, spend the snowy Christmas Eve recalling favorite holiday memories.

Almanzo (while talking about a Christmas he had as a boy): There were lots of presents on Christmas morning, but none for Royal. I was sure my Pa was right, Santa Claus got mad at old Royal for poking around where he shouldn't have. Royal never said there wasn't a Santa after that. That was about the best Christmas I ever had.
Laura: And when did you stop believing in Santa Claus?
Almanzo: I never have. And you better not go poking around!

Hester Sue (while talking about how her father dressed up as Santa in the middle of the night on Christmas Eve): You know, I never knew that was Papa until years later, after he was gone. And I still have that doll wrapped and put away. It's something I will never give up.
Caroline: I can see why that's a Christmas you'll never forget.
Hester Sue: And so is this one, because I'm with people I love.

[In Hester Sue's flashback]
Boy 2: Wishing is all you can do.
Boy 1: How do you know? I've been good!
Boy 2: You think Santa Claus cares if you're good?
Boy 1: Sure he does.
Boy 2: You'll learn when you get older. Santa don't bring nothing like that to black children. It's all for the whites.
Boy 1: How do you know that?
Boy 2: Just look at him! He's a white man! He takes care of his own.

Charles: You know what? I'm glad we got snowed in. I mean, what more can a man ask for? A beautiful morning, a house full of loved ones and a brand-new scarf.
Caroline: Charles Ingalls! You peeked?
Charles: Well, of course I did. You're always telling me I act like a child. 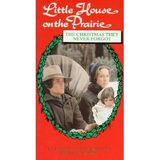 Retrieved from "https://littlehouse.fandom.com/wiki/Episode_811:_A_Christmas_They_Never_Forgot?oldid=18948"
Community content is available under CC-BY-SA unless otherwise noted.