Little House on the Prairie Wiki
Register
Don't have an account?
Sign In
Advertisement
in: Characters, Female characters, Ingalls,
and 8 more

Karen Grassle
Caroline Ingalls (née Quiner,) or "Ma" was the wife of Charles Ingalls and the biological mother of Laura, Mary, Carrie, Charles Jr. and Grace Ingalls. She is also the adoptive mother of three children: Albert Quinn and James and Cassandra Cooper.

Caroline was born December 12, 1839 in Brookfield, Wisconsin to Charlotte and Henry Quiner. She had three brothers, Joseph, Henry, and Thomas, a sister, Eliza who would eventually marry Charles' brother Peter, and a younger half-sister, Charlotte "Lottie" Holbrook. Her father died when she was a young child however, so her mother later married Fredrick Holbrook. Although resistant to him at first, Caroline was touched by his kindness during a very special childhood Christmas when she was feeling especially sad, and she soon learned to love and respect her new stepfather as if he were her natural father.

She met Charles when they were both young. Once, Charles invited Caroline to go with him to a barn dance and never showed up; mad, Caroline went home. Charles showed up and at her house and explained why he wasn't there; he was beaten up by school bullies. Charles stayed and they had their own dance with just the two of them. Years later, Caroline told her own children this while waiting for Charles, who was stuck in the rain, to come home.

Once, Caroline's parents came for a visit but her mother died during the trip. Her stepfather was distraught until he was convinced to write an autobiography; during this time Mary also had her baby, who was the Ingalls' first grandchild. 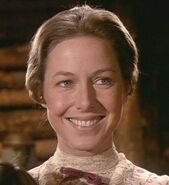 Caroline had been a teacher for a short time before her settlement with Charles in Walnut Grove. After marrying Charles, the two lived in the big woods of Wisconsin; they moved to the prairies of Kansas next, but had to leave after being ordered out by the government. Later, they settled in Plum Creek of Walnut Grove, Minnesota.

During their stay in Kansas, the Ingalls family met Isaiah Edwards, whom Caroline tolerated at first, but finally did accept as a close family friend. After they had lived in Walnut Grove for a while, Charles' wheat crop was ruined by a hailstorm, which left him looking out of town for work. During this time, Caroline and the other women of Walnut Grove harvested the wheat which was salvageable, by hand. Charles returned but did have to leave again to find work.

Prior to getting married, Caroline was a schoolteacher. But she had to quit when her and Charles moved to a house near no school. This came in handy when a teacher was needed at the school, such as when Miss Beadle was injured. She was also on the Walnut Grove Church Committee.

Caroline was always known to be kind, gentle, generous, and faithful. She often tries to avoid arguments, but sometimes she fails. She was also very loyal to Charles, her husband, as it was mistaken in the episode: The Handyman, that she was in love with another man. She was also very good at controlling her temper, although in the episode: The Award, this got quite out of hand, which Caroline soon regretted. She can also be quite quietly argumentative with other womenfolk, such as Harriet, especially when it involves her children. She was very protective of them. Caroline does not typically show favoritism with her girls, though on the show she has more scenes with Mary and Laura than with any of the others (and in the later years after Mary leaves, she is particularly close with Laura, guiding her through the teenage and adult years).

Caroline did seem to have one weakness that she was never really able to cope with, and that was that she felt terrible that she was never able to bare Charles a son. This hit her hard later in life, when she found out she could have no more children which made her feel of no use to her husband. (Episode 720: I Do, Again)

In the original book series, Caroline's parents were Henry and Charlotte Quiner. She was the fifth of eight children. She had two sisters, Eliza and Martha, and three brothers, Joseph, Thomas (known as Uncle Tom in These Happy Golden Years) and Henry (known as Uncle Henry in Little House in the Big Woods and On the Shores of Silver Lake). She had a stepsister, Lottie, and a sister, Martha,  who died before Caroline was born. When she was five, her father Henry died in a shipping accident. Her mother did get remarried to a nearby farmer, Fredrick Holbrook; they had one child, Charlotte "Lottie" Holbrook. Caroline Ingalls died when she was 84 years old.

There are seven books based on Caroline's childhood;

Caroline was portrayed by Karen Grassle in all of her appearances throughout the series.

She was also portrayed by Erin Cottrell in the Little House on the Prairie miniseries (2005).