Almanzo James Wilder (/ælˈmænzoʊ ˈwaɪldər/; February 13, 1857 – October 23, 1949) was the husband of Laura Ingalls Wilder and the father of Rose Wilder Lane, both noted authors. He is portrayed in the NBC-TV series Little House on the Prairie and the three subsequent LHOP TV movies by actor Dean Butler.

Wilder is also a well-known character in the Little House books where his wife wrote about their courtship and subsequent marriage in The Long Winter, Little Town on the Prairie, These Happy Golden Years, and The First Four Years. He also appeared briefly in chapter 28 (“Moving Day”) of By the Shores of Silver Lake. Almanzo was characterized as a quietly courageous, hardworking man who loved horses and farming. He was also an accomplished carpenter and woodworker.

Farmer Boy recounts events of Wilder's childhood starting when he was eight years old, in 1866. Among other things, he goes to school (when not needed at home for the farm work), learns to drive a team of oxen, attends a county fair, and enjoys a mid-19th century Fourth of July celebration in town. He also learns how to deal with being bossed around by his older siblings, particularly his strong-willed sister Eliza Jane, who would later become a teacher of his future wife.

Farmer Boy, by publication date, was the second book written in the Little House series. Published in 1933, it was followed by Little House on the Prairie in 1935. The original order of publication was changed by the publisher Harper with the release of the newly illustrated 1953 edition.[1][2]

Almanzo moved to Walnut Grove with his sister, Eliza Jane, who taught at the school. This is where Laura first met him, whom she quickly took an attraction to; as did Nellie. They competed for his attention, which led Nellie to invite him over for dinner at her restaurant. Laura volunteered to do the cooking, which was cinnamon chicken. She, however, substituted the ingredients and used cayenne pepper instead of cinnamon. This cut the dinner drastically short.

After misleading Laura on an upcoming test, Nellie engaged in a wrestling match with her in the mud. Almanzo broke up the fight and took Laura back to get her cleaned up. Later, after being told a twisted version of her whereabouts, Charles and Jonathan went to Almanzo's house, and after seeing her in his robe Charles assumed the worse and punched him. Before the situation could escalate further, she explained the situation.

Almanzo courted a few other women unsuccessfully while Laura watched on jealously. Though her crush on him was unrequited for a while, he finally began to see her as more than a "little friend" right before her sixteenth birthday, when she got her teaching license and he volunteered to drive her back and forth from the small town where she was teaching. On her sixteenth birthday, they shared their first kiss and he gave her a scarf, a traditional courting gift at the time.

Although Charles initially resented Almanzo courting Laura due to their age difference, their relationship blossomed quickly. He asked Charles for her hand in marriage, but his answer was no because Laura was still too young. She agreed to wait to marry him, but he was hurt. He left and lived in Sleepy Eye. They made up and Charles agreed to let them marry but to wait for one year, which they agreed. While they clashed several times throughout the courtship, they eventually married and resided in Walnut Grove. Later, Almanzo fell ill, and during a hailstorm he made the mistake of going outside when he began to go numb; it turned out he was suffering from a stroke. Following that, he bitterly resigned to life as a cripple. The birth of his and Laura’s daughter, Rose, did not help his new life situation. To make matters worse, a tornado leveled their house, leaving Laura injured and becoming embittered in self-pity, just like Almanzo. He made the decision to get better and eventually did.

After those events, Almanzo's brother, Royal, arrived in Walnut Grove with his daughter, Jenny. He told them that he was terminally ill and the reason he came to Walnut Grove is so that Jenny could get to know her adoptive parents. Royal died and Laura and Almanzo adopted her, and they lived together in Walnut Grove.

Almanzo and Laura had a son who died about a week after he was born. One fateful morning, they awoke to find him dead. They were undecided on what to name him before he died, so he never got one (Episode 918: A Child With No Name). 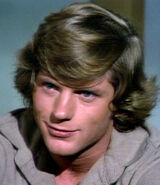