Albert Quinn Ingalls was a young boy who's biological father was Jeremy Quinn. He was put in many orphanages as a child. He was bullied because he wasn't very big or able to fight back even though he tried. He ran away when he was very young and lived on his own. He was able to survive on his own in a big city when Charles and Caroline showed up in Winoka. Albert came back to Walnut Grove with the family. He was then adopted by Charles and Caroline, making Mary, Laura, Carrie and Grace his adopted siblings. In later episodes he became the adopted brother of James and Cassandra.

Albert Quinn Ingalls is the adopted son of Charles and Caroline Ingalls. He was introduced to the Ingalls family when Laura caught him stealing newspapers and money from the hotel where her family worked in Winoka when he was 10 years old. Charles let him go after returning the money and papers. But later, he caught him stealing a lantern from a store, and chased him to where he was living underneath some stairs. He didn't want to be caught as he didn't want to live in an orphanage again, but he needed to steal to survive. Charles had compassion and purchased the lantern for him.

Albert was later invited to Mary's birthday party where he was introduced to the rest of the Ingalls and the other guests as a friend of Charles. When the time came for the Ingalls to leave Winoka, he came with them back to Walnut Grove. But times were rough for him. He ran away several times, once because Laura was jealous of him. After searching for his birth father for a family tree project at school, Charles adopted him as his son.

During his teenage years, Albert went through many romantic relationships. His first real relationship was with an emotionally abused teenage girl named Sylvia Webb. Unfortunately their relationship was short lived. Sylvia had been abducted, raped and impregnated by the town's blacksmith Irv Hartwig. At first, Albert was thought to have fathered Sylvia's unborn child, thanks to rumours spread by Harriet Oleson. Sadly, Sylvia suffered mortal injury when she fell off a ladder trying to evade Hartwig, who tried to assault her a second time.

Some time later when Charles decides to move out of Walnut Grove he and the family left the town.

But when Albert moved to Burr Oak, Iowa, Charles was told by the police that he had started stealing again. He was brought back home and the family found out he was addicted to morphine. After he was off of it, he decided to go to medical school to become a doctor. He planned to go to college, but he became severely ill and was sent to the hospital.

Once diagnosed, Albert decided to leave the hospital and return to Walnut Grove to spend the final months of his life, where Charles was giving a speech on crop sharing. Laura and a severely ill Albert followed a group of students up a mountain where they have shared fond memories of their past.

It is never explained at the end if Albert died of his terminal illness or survived by a miracle because, at the end of "Home Again," Laura's voiceover reveals Albert returned to Walnut Grove 20 years later as the town's doctor. It is also clear that Albert lives through the final scene of “Look Back To Yesterday”, which may very well support Laura’s closing statement in “Home Again”.

In "Dearest Albert, I'll Miss You," Albert becomes pen pals with a young lady named Lesly. They both lie about their physical appearances without the other one knowing. When Albert goes to visit her at her home to tell her the truth, he sees that she has been lying and is in a wheelchair, but they reconcile and remain friends.

In "Sylvia" (Parts One and Two), Albert becomes fond of a young girl named Sylvia who lives with her abusive father. They begin a relationship, but unfortunately she is kidnapped and raped by a man with a mask. Doc Baker tells Albert of Sylvia's pregnancy and asks if the baby is his. He is very upset by this finding, because he knows the baby is not his, and he believes that Sylvia has been cheating on him. He sees her secretly despite her father's threatening to kill Albert if they are seen together, believing also that Albert is the father of his grandchild. Albert and Sylvia secretly see each other and plan to run away. Albert lets people think that the baby is his. While they are planning to run away, Sylvia hides out in an old barn. The masked man comes to find her again, and this time she climbs up a ladder and falls. Her father, Charles, and Albert take her home, where, after being tended to by Doctor Baker, she dies in her bed, with Albert at her side. 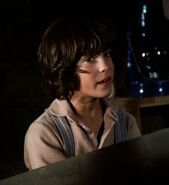 Retrieved from "https://littlehouse.fandom.com/wiki/Albert_Quinn_Ingalls?oldid=22053"
Community content is available under CC-BY-SA unless otherwise noted.